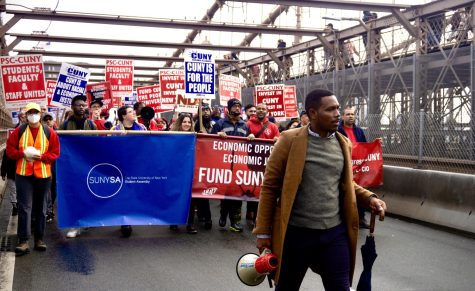 BARUCH COLLEGE–Hundreds of CUNY and SUNY staff, students and supporters blocked traffic on the Brooklyn Bridge in support of increased public education funding on March 6.

The Brooklyn Bridge Budget March, organized by the Professional Staff Congress of CUNY, began with speeches at Brooklyn Borough Hall by union presidents and legislators and finished with a second round of speeches at Foley Square that featured student speakers, including current student representatives.

“We are saying that our students deserve the best,” James Davis, PSC’s president, said. “They deserve safe, clean buildings with excellent facilities. They deserve more academic advisement, more mental health counseling to support their progress toward their degrees. They deserve access to full-time faculty, professors with decent wages and job security who don’t have to rush off to the subway to their next gig.”